One day, the following ad showed up in the Vintage Ads LJ community (back when people still used livejournal) and I immediately became enamored with it. 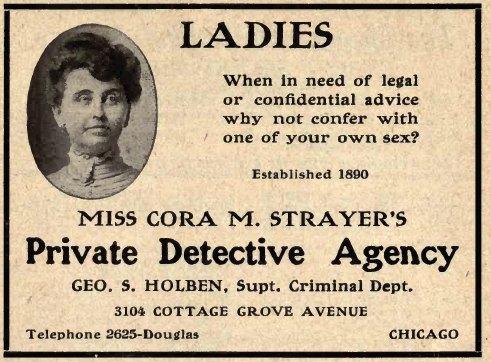 I am really into old ads and Chicago history, and the ad copy filled me with joy. I loved the idea of a female PI working the South Side of Chicago during the Progressive Era. My mind almost immediately started concocting stories and cases for her (historical fanfic? Is that a thing?). Cheating husbands, missing daughters, crooked alderman, maybe even a murder in the Stockyards. I was sure she had an affair with Upton Sinclair and her nemesis must have been H.H. Holmes.

I resolved to find out as much about her as I could. I never would have guessed that I would find so much and that she completely lived up to my expectations. So here is a timeline and documentation of everything I could find out about her (or at least as much as I could while spending no money and "researching" from the comfort of my couch). I HIGHLY recommend you click the links and read the articles. They're amazing.

I'm glad I can share this with the rest of the internet, feel free to hit me up via email or twitter with any comments, questions, or extra information you might have.

"Do you want to wait until all the men are killed to do your duty, sisters? A woman that would stand and let a man do all the fighting and suffering for his country is not a soldier. She belongs in the effete ranks of those who hurry abroad when the trouble starts. Pooh! She is not even worthy of the ballot."

Apr 1914
The regiment has 100 women.
May 1914
200 women. This scheme far and away gets the most coverage of anything Cora did, getting picked up in newspapers across the country. I have to admit I don't get what her plan was here. I mean, it's not like they were going to let her go fight in Mexico. Maybe a PR stunt to help women's sufferage?
1918
Cora is hired by the friends of a Mrs. Russell, who think her husband is having an affair. She is joined on a stakeout by police, who want to bring up Mr. Russell and his mistress on morals charges. The situation culminates in a car chase up Lake Shore Drive with Cora in pursuit behind the wheel of her black sedan. The ensuing case receives big coverage. Also, check out the awesome Wurlitzer ad on that page. They're "sanitary" records!
March 1919
Cora hosts Mayoral candidate Robert M. Sweitzer at her home. Cora's a Democrat! Or at least against corrupt machines.
1920
In the 1920 census Cora is still living at 2838 Indiana, but her retired father Frank has now moved in with her.
May 1923
The office has moved to 4933 S. Michigan Ave.
Apr 13, 1927
Frank Strayer dies in Chicago.
1930
On her 1930 census form, Cora lists herself as "Cora Fortune". She lives at 5834 S. Wentworth and is 61 years old. She's a widow and can read and write. She pays $40 a month in rent. She is still working, owns her own business, and declares her profession to be "Investigator".
Feb 6, 1931
This is the last ad I can find for the agency. The office is at 5834 S Wentworth.
Dec 19, 1932
Cora May Strayer Fortune dies in Chicago of a cerebral hemorrhage. She was 65. Her obituary mentions an adopted son, Donald Meyer. In the 1930 census, the Meyers lived next door to Cora, including their 19 year old son Donald. Both of Donald's parents were still alive, so maybe Cora had simply befriended the young man, or maybe.... 👀

I've tried to visit Cora's grave in Chicago's Rosehill Cemetary. While the area and plot number she is in are legible in the cemetary records, the row unfortunately isn't. The vast majority of the headstones in that area are gone, overgrown, or so completely weathered to be unreadable. I can get to within about of 100 feet of where she is, but the exact spot remains a mystery. But she's there.